Esurance and Double teamed up to do a fun TV commercial for the US Open, starring the Bryan Brothers tennis duo.

It came out great, even though we don't recommend driving your Double outdoors! 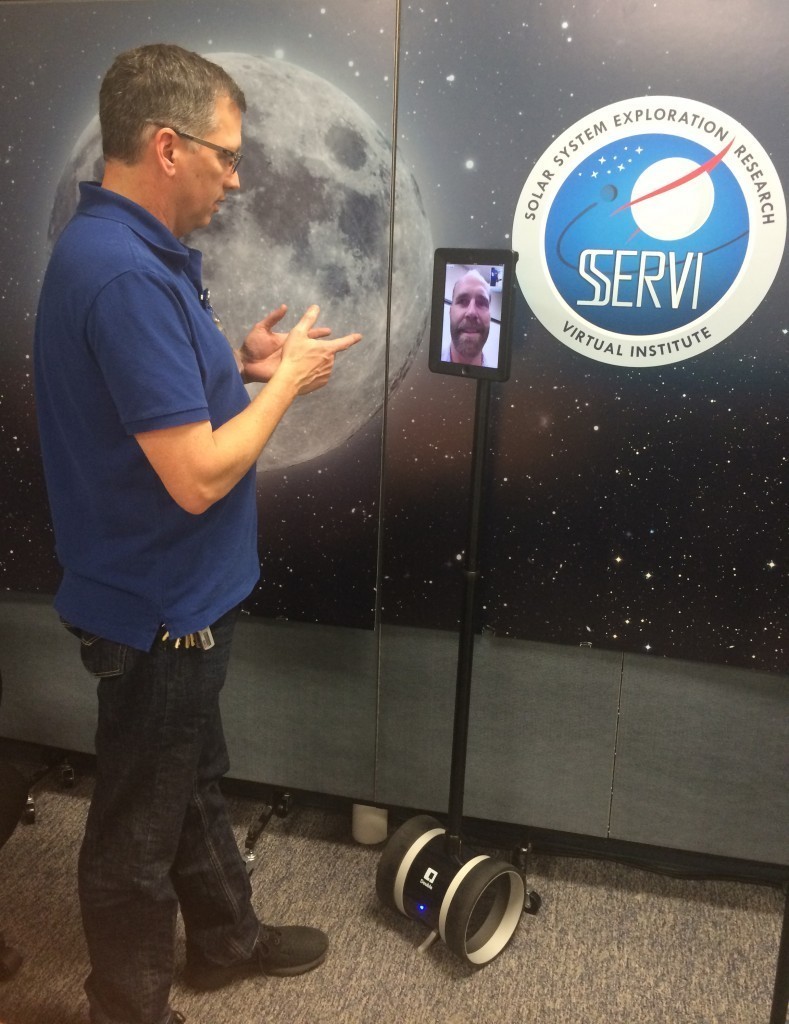 NASA’s Solar System Exploration Virtual Institute (SSERVI) would like you to try out their Doubles! Users can call into one of their robots and get a virtual tour of SSERVI.

Please email Ricky Guest or Teague Soderman  with “Double Robot Guest Access” in the subject line to obtain a user name and password.

Koupah is a Point of Social platform, combining mobile, social and POS (Point of Sale) in a retail environment. They are dedicated to building and enhancing the customer-retailer relationship by personalizing the experience. David Merel, CEO of Koupah, uses his Double to be present in the office. Commuting to Midtown New York City can sometimes be difficult, but with the help of David's Double, he's still able to check in with his employees.

As every company knows, travel can be very expensive. When you add up the cost of transportation, hotel, and food for several employees, you can expect to pay thousands of dollars. That is why some companies, like Koupah, have looked for ways to reduce travel costs.

Koupah also attends many trade shows and brings their Double with them. Travel costs have been reduced and, more importantly, his staff are able to be "present" at their booths. David feels that Double has become a "great marketing tool" not only because it's helping his company save money, but because Double is helping to change the way we communicate with each other, just like Koupah.

Double Robotics is very proud to be attending its first ISTE Conference & Expo! The International Society for Technology in Education (ISTE®), is a membership association for professional leaders looking for ways to use the latest technology in the educational field. We are thrilled and excited to show ISTE attendees what Double Robotics is all about!

Since we began shipping over a year ago, we have seen our Double being used in many different places - including inside the classroom. Double has helped students attend class when they weren’t physically able to and has also helped teachers connect with students remotely.

Recently, we visited the Kodiak Island Borough School District to see how they are using Double. Because traveling to these schools can be difficult due to harsh weather conditions, KIBSD has deployed 14 Doubles to reduce travel costs for professional development specialists and administrators.

If you are attending the 2014 ISTE Conference & Expo, please stop by the Double Robotics booth, #650. We’d love to see you there!

Bridging the gap between formal and informal interaction

Twitter’s Engineering team in San Francisco wasn’t alone in their search for a technology solution to the disconnect created by global sprawl. Joining the ranks alongside John Deere, Steelcase, and HP, VP of Engineering at Twitter Raffi Krikorian purchased his Double in August of 2013.

Krikorian’s Double lives in his office and, while he’s visiting the Pittsburgh satellite office, Double can wander the aisles.

Before Double entered the building, Twitter’s engineering team was heavily reliant on typical video conferencing applications. “We’re not averse to talking to people electronically,” Krikorian said. But there was something missing from the interactions that took place between the mounted screen in a conference room and the people sitting at the table. It was static, in the sense that the interaction was stuck between those walls.

“For us, video conferencing works in a very regimented way - it’s tied to the calendar, literally,” Krikorian said. Meetings are very reactional and directive, he added. “But most work gets done between meetings, in casual conversations.”

Krikorian missed out on water cooler conversations quite frequently: “One of the things that would frustrate me when I didn’t have Double, is when I was traveling, I felt really disconnected.”

So they began their quest to humanize remote engineering at Twitter.

It was important that the solution they chose resembled Twitter’s company culture and the team’s personality. Double easily fit the bill - elegant, sleek, simple. “At Twitter, we’re pretty mindful of those types of touches,” Krikorian said. “We pride ourselves in being a design-ish culture.”

A few years back, a clunkier version of a telepresence robot was tested at the San Francisco office, but it only gathered dust. ”It just didn’t do it for us,” Krikorian said. “With Double, it’s just simple. It’s just two wheels and a rod with an iPad attached to it. Everyone can get their heads around that.”

Not surprisingly, Krikorian also uses Double while in San Francisco. He’s been known to connect to it in the evening after most people have left for home. “When I’m not in the office, I’ll just drive it around and see what people are doing,” Krikorian added. “If I bump into someone, we might chat for a bit, and then I keep on driving.”

The engineering team operates under a “very lenient” work from home policy that also includes adjustable in-office hours. Although most prefer face-to-face interactions and opt for typical 9am-6pm days, some choose to work late into the night. On the nights that Krikorian connects to Double from his home in San Francisco, he is able to create face-to-face interactions that otherwise might not have been possible with team members who work more efficiently at night.

“It allows that type of chance encounter to happen,” Krikorian said. “Instead of being very transactional, it becomes much more part of the environment.”

Double has established an entirely new narrative for Twitter’s global engineering team. “I didn’t expect to feel connected to the office when I was driving Double around,” he said. “I feel better because I have a Double.”

Austin, March 4, 2014 – TinyEYE Therapy Services is taking telepractice to a new level of educational innovation. They announced this morning their official partnership with Double Robotics, a California-based robotics company known for their telepresent robot. TinyEYE has begun using this robot in delivering their speech therapy services in Canada and the USA.

HOISINGTON, Kansas – It’s been months since Austin Brack has been in a classroom, but that hasn’t stopped him from attending his kindergarten class.

He now uses a robot to go to school.

“It’s been huge for him. It’s given him a little bit more of a purpose,” said Amanda Brack, Austin’s mom.

Austin is diagnosed with Stevens-Johnson syndrome...

Las Vegas—January 07, 2014—Double Robotics, Inc. today announced at the 2014 International CES that the charging dock accessory for the Double telepresence robot is now available for pre-order through www.doublerobotics.com.

“The charging dock has been the most requested accessory for Double,” said David Cann, CEO and Co-founder of Double Robotics, Inc.  “We’re excited to provide our customers with an accessory that makes it even easier to connect remotely.  Our ambitious engineers designed Double to be future-compatible with the charging dock, so that even our earliest customers can take advantage of this powerful upgrade.  The dock is designed around a single beautifully sculpted block of aluminum, so customers can proudly park their Double in the office.”

The charging dock is compatible with all Double robots that have been previously purchased.  The dock charges both Double and the attached iPad simultaneously.  A video demonstration of the dock is available on the Double robotics website.

A new iPad mount that supports iPad charging will be standard on all new units and included with a dock purchase free for customers with legacy iPad mounts.  The docking station is sold for $299 and will begin shipping in February 2014.

Double is part of the Apple Made for iPad Program and is compatible with iPad 2, iPad (3rd generation), iPad (4th generation), and iPad Air. 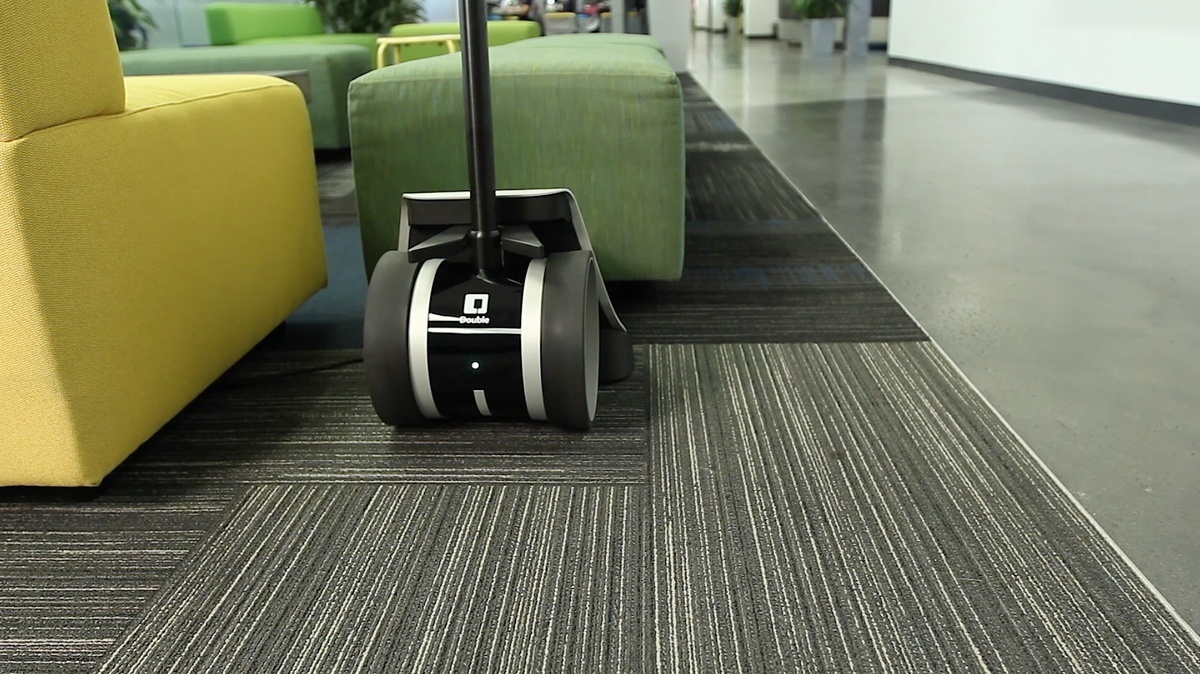 "So what do you do when a highly valued employee moves to a faraway state? Immediately start the recruitment process or come up with a creative way to retain the employee and keep their productivity high? Benelogic, a technology company in Timonium, MD, recently faced this challenge."